Is your Smartphone Interrupting your Sleep? 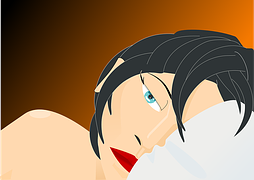 A person could likely be lost without technology.  During day to day routines individuals have become accustomed to checking everything through smartphones, tablets, or computers.  Calendars, email, internet, media, movies, documents, voice communication via text messaging and telephone calls - you name it - can be accessed via a smartphone.  These activities never sleep and neither do certain people.  We are in constant contact with each other.  I am a huge offender of sleeping with my smartphone close by.  My excuse, I may miss an emergency call from my children or loved ones and I rely on my smartphone's alarm to wake me.  What can we do differently?

In researching this topic, 365 Days of Health and Fitness found the following alarming smartphone sleeping dangers.

1.  Insomnia Drs. and scientists have noted that there is a link between insomnia and smartphone sleeping.  Furthermore, many sleep disorder studies found a positive correlation between sleeping issues and smart phones.

The article 'Disruptions' from the New York Time's Blog Bits indicated three important points: a) waking up and checking a nearby smartphone makes people tense resulting in restless interrupted sleep b) having a smartphone close while sleeping can produce threat vigilance an anxiety that can keep one awake ultimately leading to insomnia c) the blue light from smartphone screens and similar gadgets interferes with normal sleeping patterns.

2.  Blue Light The blue light that is transmitted from smartphone screens and their parent devices can also be hazardous to physical and mental health.  Experts advise smartphone users to steer clear of using their devices in the evening before or while trying to sleep.

The blue light can cause problems with vision and the melatonin levels in the brain.  Melatonin is a hormone that helps individuals sleep.  In fact, Business Insider reported that lack of proper melatonin can lead to more serious health problems such as obesity, genetic problems and memory issues.

3.  Smartphone Fire. If the other two reasons above are not enough to alarm individuals into ending the bad habit of  sleeping with their smartphones, maybe the video below will.  Consumer Affairs reported, a young teens smartphone caught fire after overheating under her pillow while she was asleep.  Even if such an instance only happened once - once is scary enough not to place a phone under ones pillow.

Loria, K. (2014, Sep). Smartphones Ruin More Than Your Sleep - They May Also Be Destroying Your Vision. Business Insider.